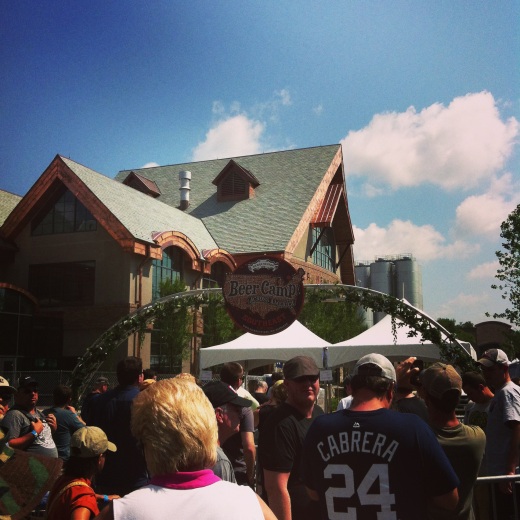 So it’s not a tour bus filled with some of the nation’s best brewers — the likes that carried Ken Grossman and crew on their seven-city Beer Camp Across America tour, from one coast to another — but the ten-year-old Jeep would get us to Mills River for Sierra Nevada’s Beer Camp festival all the same.

And get there we did, though we didn’t seal up a can of Pliny the Elder en route, nor did we use a coffee pot in brewing a Berliner Weisse on board. We didn’t make pit stops to ride donkeys, sky dive, or raft down the Colorado River.

No, our two-and-a-half hour trip was a little more tame compared to Sierra Nevada’s Beer Camp tour. But we — myself and friends Charles Willet and Eric Gaddy (beertographer extraordinaire) — did arrive at the WNC Agricultural Center at 10 a.m., a good hour before the shuttles left for the new brewery.

But no matter, because the line was already filled with a handful of other ambitious people eager to try hundreds of southeastern beers on the grounds of the new brewery. We passed the time by talking about – what else, beer — and lauded our hometown breweries until it was time to board the very first bus for the festival.

An entrance road winds up through a beautiful wooded area, with rock walls and flowers along the way. In more than one spot I spied stones in the shape of gargantuan feet, no doubt inspired by the brewery’s Bigfoot barleywine. Upon coming out of the woods, we were greeted with the beer equivalent of the Biltmore Estate. All copper, stone, glass and slate, the building seems more suited to a mountain retreat than a spot in which to crush grain, boil hops and pitch yeast.

There’s no dressing up the massive tanks outside, of course, but the building beside them is as majestic as breweries come. It is not open to the public as of yet, but it was enough to grab a beer and look up from time to time to marvel in its presence. I cut the heat of the day with a bevy of refreshing sour beers, including Steel String’s Zupfen Gose, Trophy’s Participant Berliner Weisse and Fullsteam’s Fearrington Summer “Durmliner Weiss,” it served mit schuss-style with a blackberry lemon verbena syrup.

Building something of this scale would be a feat for anyone, but it is an especially crowning achievement for Grossman, who founded Sierra Nevada way back in 1980. Young and with very little capital, he built the Chico, California brewery by cobbling together used dairy equipment and engineering around a myriad problems as they arose. The Chico brewery has grown into one of the most impressive operations in craft beer, with a massive brewhouse, a restaurant, and fields of grain and hops bound for the brewery’s line of estate beers.

Now, Grossman is poised to do it all again in North Carolina. Brewing is already underway, and the restaurant and pub will be opening in the coming months. Like the one before it, this brewery is going to be a powerhouse capable of producing a great amount of beer, but industrial factory it is not. Sierra Nevada has long been committed to sustainable practices, as evident by the solar panels that stand tall over the parking lot pavers.

To have come all this way, to have taken a gamble on craft beer long before that moniker would become common place, before there was a market for not one large Sierra Nevada brewery but two — I wonder what Ken Grossman thought as he saw so many enjoying themselves at his new brewery. The hundreds of brewers, no doubt many of whom were inspired by Sierra Nevada themselves. The marching band, its members clad in animal prints as loud as their instruments. And the festival attendees, in awe and appreciation of it all.

I have to wonder if — despite so much success over three-plus decades in the business, an eternity in the world of craft beer — Grossman ever takes a step back in astonishment at how much his brewery and the industry as a whole have grown.

Thousands of miles, seven cities, and countless adventures in between. Beer Camp came to a head yesterday at Mills River, except it’s not really an ending but rather the start of something new. The Beer Camp Across America festivals were a celebration of both Sierra Nevada’s past and future, of journey and destination. If you didn’t attend the festival, make it a point to get to the new brewery when it opens. You might have missed the trip, but you have plenty of road ahead.